Don’t be sloppy with your floppy

I ran across this artifact from a bygone era the other day, and went searching for the story behind it. Surprisingly, I could find no pictures of it, so I decided to record it for posterity. Now future generations will know that terrible computer jokes existed long before facebook, when cavemen had to physically pass the jokes to one another like the very floppy disks the DiskProtek was made to defend.

The only reference to the DiskProtek that I’ve found at all is this trademark registration. It looks like it’s expired and is available for the low price of $159 if you’d like to enter the lucrative Archaic Computer Novelty business. 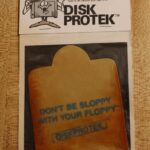 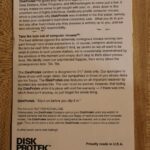 It hasn’t held up very well, but it’s probably close to 20 years old, so it’s a wonder it isn’t a bag full of dust at this point. Obviously the DiskProtek corporation produced a quality product.

Read on for the text from the back.

DON’T BE SLOPPY WITH YOUR FLOPPY.

You are to be congratulated for the caution you have shown in selecting DiskProtek to guard your hard dive against those nasties of the nineties – Data Diddlers, Killer Programs, and Michaelangelo to name just a few. It simply makes no sense to get caught with your, er…disks down in this uncertain era of highly infectious, insidiously-prolific computer viruses, which is precisely why DiskProtek was invented in the first place: namely, to keep your computer’s hard drive completely safe. What you do to protect any other hard drives you may possess is entirely up to you, and we take absolutely NO responsibility.

Take the byte out of computer viruses:

The best defense against the extremely contagious viruses running rampant through hard drives everywhere is of course, complete abstinence. But let’s be real! Who can abstain? And, as careful as we all want to be when it comes to such private matters, we’re occasionally overwhelmed by the emotions of the moment and simply don’t stop to think about precautions. We blindly insert our unprotected floppies, then worry about the consequences later. Tsk. Tsk. The DiskProtek condom is designed for 3 1/2″ disks only. Our apologies to those of you with larger disks. Our sympathies to those of you whose disks are too floppy. The DiskProtek also features an all-important reservoir tip to collect any excess bits. The user must be warned, however, that byting the DiskProtek while it is place will void the warranty – if there was one, which there isn’t anyway, so just forget the whole thing.

DiskProtek. “Slip it on before you slip it in.”

The fine print: NOT FOR ACTUAL USE.

In other words: We’re only kidding!!